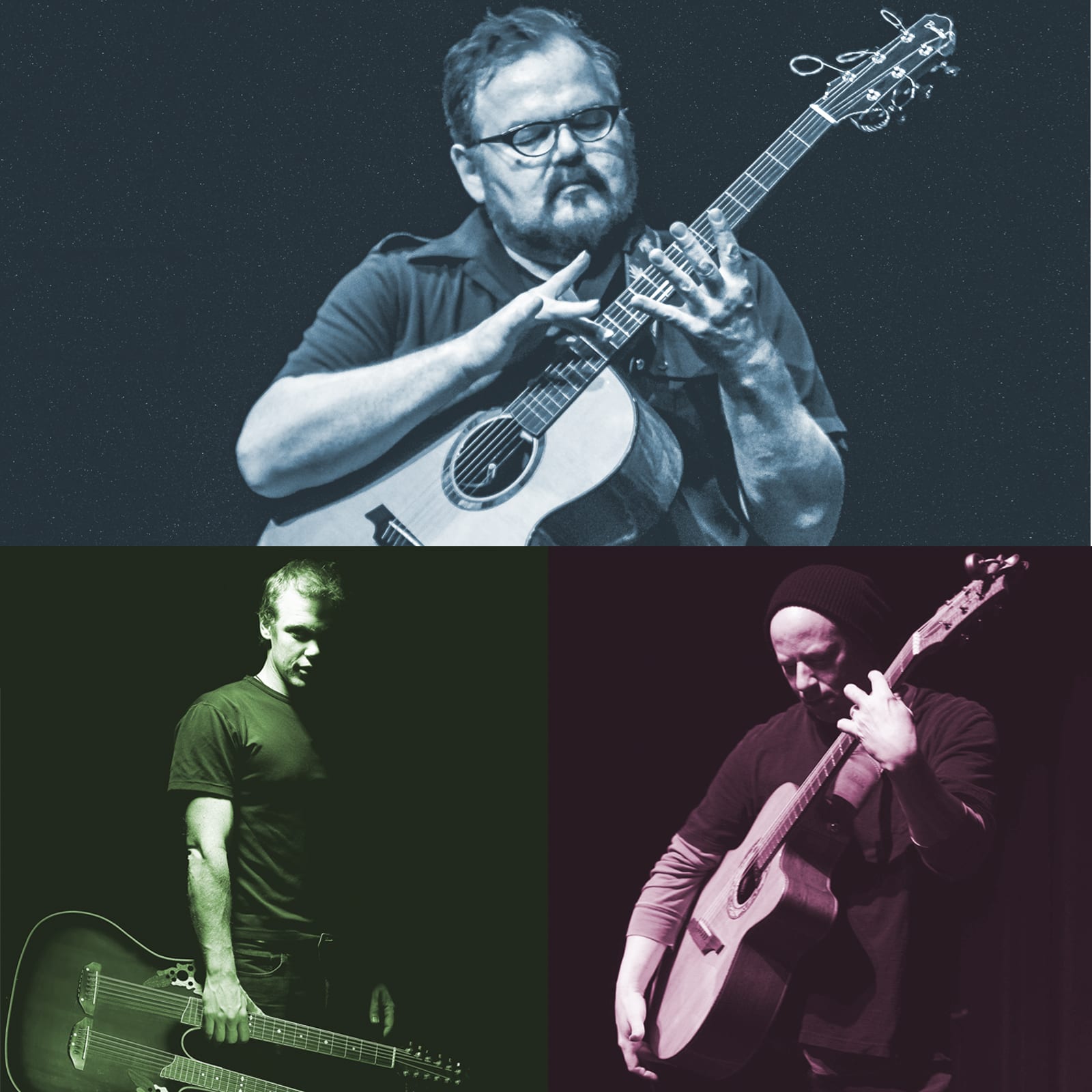 Don Ross began playing guitar virtually by accident. There was always a lot of music around the house. Don’s dad is an operatically-trained singer. So, the Ross kids heard plenty of voice exercises around their Montreal home as well as classical music on the record player growing up (not to mention the occasional blast of the bagpipes when Don’s dad felt like waking up the neighbours with another musical skill he acquired growing up in Scotland!).Don eventually studied Music at Toronto’s York University. Strangely enough, he didn’t focus on guitar but rather on composition, electronic music, and sound recording. Upon graduating, he had visions of being a composer of orchestral and electronic music or film scores..certainly not any delusions of playing solo guitar for a living. What changed his mind was seeing the success of musicians like Michael Hedges, Steve Reich and Keith Jarrett, player/composers who followed their musical intuitions wherever they led and who fell more into the category of “artist” rather than “guitarist” or “pianist.” In 1988, Don became the first Canadian to win the U.S. National Fingerpick Guitar Championship. He won again in 1996, still the only two-time winner of the competition. He signed a recording deal with Toronto-based Duke Street Records and released three CDs for them between 1989 and 1993. He then recorded three CDs for Sony/Columbia between 1994 and 1997, and then three more for Milwaukee-based Narada Records between 1999 and 2003.With the collapse of the conventional recording industry in the early 21st century, Don entered into a new venture with Milwaukee-based CandyRat Records and its founder, Rob Poland. The move to a completely internet-based model of releasing recordings resulted in the first ever CandyRat CD, 2005’s Music for Vacuuming. Don has released numerous CDs and DVDs for the new label, including his new album, A Million Brazilian Civilians, on CD and see-through orange vinyl. Don has toured regularly since 1989, across Canada, the USA, a dozen European countries, Japan, Taiwan, China, Australia, Russia and India. He has played with symphony orchestras in Canada and Germany, and collaborated live and on recording with U.S. guitarist Andy McKee, Canadian singer/guitarist Brooke Miller, Canadian guitarist Calum Graham, & Toronto bassist Jordan O’Connor. He also composes scores for television, radio and film, and does production and recording engineering for a variety of other musicians. In addition to acoustic guitar, Don also plays electric guitar, slide dobro and lapsteel guitar, harp guitar, voice, piano, keyboards, bass guitar and drums. He has just started learning to play the Kelstone, a 9-string guitar developed by Belgian musician/inventor Jan Van Kelst. At this point, Don admits that learning a new instrument from scratch at this point in his career is “humbling. I’m a rank amateur Kelstone player, and I still completely suck at it!” Don Ross grew up in Montreal, has lived at various times in Ontario, Nova Scotia, the USA, China and Quebec, and now resides in Halifax.

Boston-based Acoustic double-neck guitarist and Candyrat recording artist Ian Ethan Case is quickly becoming recognized as “one of the most creative and engaging fingerstyle guitarists in the world” (International Center for Creativity.)

After a decade of composing and performing around the country largely under the radar, in 2015 a viral facebook video of his song “Butter II” introduced his music to over 6 million listeners around the world in the course of a month. In addition to a record deal and endorsements with companies such as Ovation guitars and Boss pedals, 2016 and 2017 provided extensive touring opportunities throughout Europe and the United States, including two performances with a full symphony orchestra. Fingerstyle legend Don Ross invited Case to open for him in Ross’ then-hometown of Toronto, later describing his performance as “some of the most massively inventive musicianship I’ve ever heard/seen.” Other listeners have described his music as a cross between Michael Hedges and Pat Metheny.

His newest album, Earth Suite, features a dozen musicians from all over the globe, including four-time Grammy-winning cellist Eugene Friesen and internationally acclaimed percussionist Jamey Haddad. While the studio album features a large group and dense orchestration, Case brings much of that expansive sound to his 2018 concert performances thanks to live looping and sound specialist Stephanie Case who records, layers, and manipulates Ian’s playing on the spot for a dynamic, truly symphonic effect that defies the typical “solo musician with a loop pedal” stereotype. As one first-time listener in California exclaimed, “Ian’s music is phenomenal – watching him play is not ‘listening to music’; it’s a full mind experience. Transporting.”

Spencer Elliott is also signed with Candyrat records along with Don Ross and Ian Ethan Case and is local to Charleston, West Virginia.  Spencer began composing instrumental piano music in his early years — his influences mainly consisting of contemporary composers like George Winston.  It was later that he picked up the guitar, yet at that time he was also influenced by punk and alternative genres. For more than two decades, Spencer performed as a vocalist and occasional guitarist in a number of punk and alternative bands. It wasn’t until 2007 that Spencer turned his focus to progressive steel string guitar. Spencer spent several years taking inspiration from artists such as Michael Hedges, Don Ross, Andy McKee and Antoine Dufour.

Once Spencer began to write progressive finger style pieces, his compositional elements pulled not only from his piano background but also from his affinity for edgy guitar music. Spencer’s compositions possess a cinematic quality, painting rich melodic landscapes that fuse his contrasting influences.  Spencer has two releases on Candyrat Records and has plans for release of a full album in 2019.