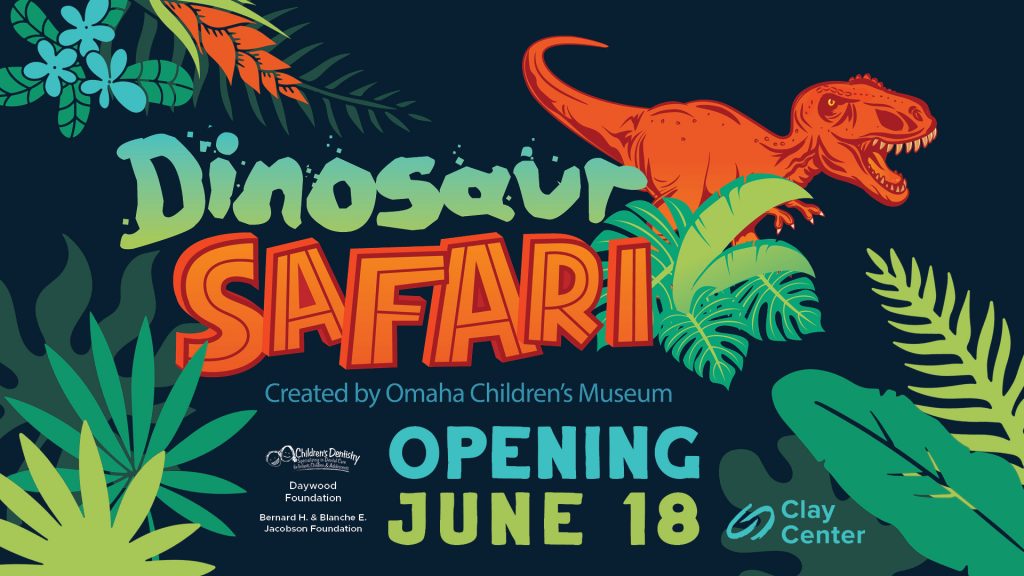 Dinosaur Safari, an immersive exhibit for children and families, opens on Saturday, June 18 at the Clay Center!

The nearly 2,500-square-foot exhibit features seven animatronic dinosaurs as well as hands-on stations that help children imagine themselves as paleontologists. The incredible world of Dinosaur Safari features colorful and life-like dinosaurs, including the Triceratops and T. Rex. In addition to the dinosaurs that move and roar, there is one climbable dinosaur for children to explore. Designed to immerse children in a world of dinosaurs and paleontology, children can play dress up in a safari tent, pretend to drive a safari jeep, and uncover large realistic fake fossils in two dig stations. The imaginative traveling exhibit is produced by Omaha Children’s Museum.

Enter a town much like Charleston but on a kid’s scale. In My Town, the kids have the jobs, get to spend (imaginary) money and participate in fun activities every day! Will your child be a veterinarian today? What about a mechanic? They can even be mayor! The possibilities are endless in this hands-on city of fun!

Focusing on the human body in motion, Healthy Me will provide a safe environment for guests to test their physical skills, and help them learn why regular physical activity is essential to their health. Within the exhibit, guests will investigate body systems (skeletal, muscular, circulatory, nervous, as well as organs) to learn about their function and how they work together. They will also measure themselves as they stretch, raise their heart rates, test their balance and reaction time, and try to increase their skills at various sporting events. Healthy Me will help guests understand that engaging in healthy lifestyle choices now will reduce risk of disease later in life and will allow guests to challenge themselves physically and receive positive feedback in exchange for effort.

In WaterWorks visitors play and work with water along sweeping flow routes, dramatic water falls, controlling the water to animate and energize everything in its path in an expression of water’s power. Along the way, they will experience the potential, kinetic and mechanical energy of water. Activities include turning a large water wheel to generate “electricity”, opening and closing a dam’s water into the river, guiding boats through a lock system blocking, releasing and re-routing water, and many other engaging activities, including water play (funnels, scooping and pouring) for toddlers.

Generously underwritten by the Maier Foundation, the Maier Foundation Music Studio is a place where visitors make and explore music together. Visitors see, listen to, move to, and create their own music; examine the scientific foundations of music they hear; and explore the mathematical concepts of rhythm, pattern, and harmony. Some instruments will, at first glance, be a puzzle – how can this thing make music? Other instruments will appear to play themselves. Group “events” can be seen throughout the space: a multi-station futuristic music machine, a circular thumb piano that multiple people can play simultaneously; a giant slinky suspended overhead that teaches children the basics of longitudinal waves. At the Recording Studio, visitors play sound engineer mixing “tracks” of a song to perfection. The exhibit is comprised of four basic areas: Experience Music, the Instrument Studio, Composing and Good Vibrations.

Explore art in new and exciting ways! The Juliet Art Museum is now home to a brand new, interactive Art Space!  In Art Space guests of all ages can explore basic art principles while having fun!  Spin the wheel of color and learn about the basic elements of color and color theory.  How do we perceive color and what the context of color?  Explore digitized art and the basics of digitized illustrations on our giant pixel wall!  Test your balance by making your own mobile, create your own mural and curate your own exhibition!  The creativity doesn’t stop there – budding film makers can explore stop motion animation and make their own films.

See all three stories of the Clay Center from a new perspective as you climb a work of art. From kids to adults, everyone can take part in this interactive exhibit.

Ashton’s Climbing Sculpture Rules:
– Must be at least 40″ to climb
– Shoes must be tied securely
– No sandals, bare feet or heels
– Remove loose articles from pockets and store in cubby
– No food or gum

This climb is challenging!

You should NOT climb if:
– You are afraid of heights
– You do not like tight spaces
– You are prone to dizziness
– You are pregnant
– You have heart or blood pressure issues
– You have any medical condition that could impair you while climbing